Putnam County is located in the northeastern region of Florida, just to the south of Jacksonville, which is Florida’s largest municipality by population and size. Palatka, the County Seat is located on the St. Johns River, one of the few rivers in the world that actually flows north. The river and its tributaries flow through many of Putnam’s communities. We are located within two hours driving distance to all major attractions in central Florida, international airports and Florida’s beautiful beaches. 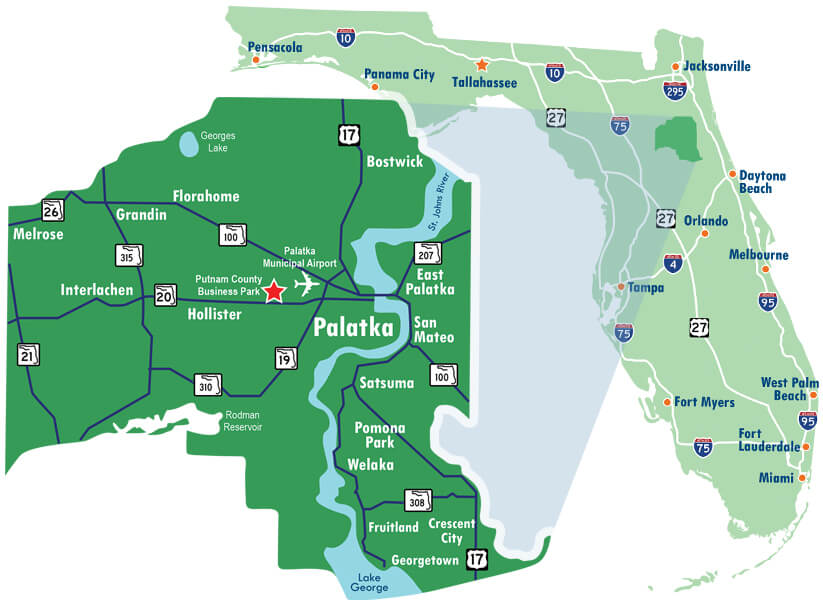 The original settlers of Pilotaikata (meaning Crossing Over or Cow’s Crossing) were the Timucuan Indians. These natives aided William Bartram with his mission to explore this wild land.

The name of the town was later changed to Palatka, and was used as a military post called Fort Shannon during the Seminole Indian Wars. Both Confederate and Union Troops occupied Palatka during the War Between the States.

Following the tribulations of wars, Palatka and the surrounding area’s prosperity was largely due to the use of the St. Johns River and its tributaries. Citrus and timber were shipped worldwide from Palatka and the natural beauty attracted the rich and famous, including Thomas Edison, Harriet Beecher Stowe, President Grover Cleveland, the Mellon Family and many more.

During the later part of the 19th Century and into the 20th Century, Putnam County was a tourist mecca. The City of Palatka became known as the “The Gem of the St. Johns” and boasted several world-class hotels, such as the Arlington, Saratoga, La Fayette, and Putnam House with over 6,000 rooms for let. Crescent City and Welaka were destinations for wealthy northerners for winter retreats where they could enjoy the warm Florida winters.

These were prosperous times for Palatka and Putnam County. From Palatka, visitors would ply the St. Johns River to explore and settle the interior of Florida.

Although many of these historic buildings no longer exist, Palatka historic areas have several beautifully restored examples of the architecture from earlier times. Driving ans walking tour maps are available from the Putnam County Chamber of Commerce. Tours of the Bronson-Mulholland House, an historic antebellum plantation home built by Palatka’s founding father Judge Isaac Bronson, are available to the public three days a week, and for groups by appointment.

Ravine Gardens State Park, developed during the depression, attracts visitors throughout the year, particularly in the late winter and early spring, when thousands of azaleas are in bloom in the 182-acre, 100-foot deep ravine.

This lovely small town, full of southern charm, sits amid a generous grove of live oak trees on a high wooded bluff between two lakes. Named for its crescent moon shaped lake, this quaint town has attracted visitors since the late 1800s.
The town was established in 1876, and incorporated in 1883. Crescent City was one of Florida’s major citrus growing areas in the 1890s, with 42 citrus growers by 1895. In 1902, the area’s primary cash crop changed to ferns.

Today the city displays the “Belle of Crescent City”, a citrus packaging label, as its logo. There are a number of Victorian era homes in the historic district (tour brochure available), as well as gift and antique shops. Fine dining and accommodations can also be found in Crescent City’s downtown area.

Before the European involvement in North America, the Timucuan Indians called the St. Johns River Welaka or “River of Lakes”.

By the mid-1880s, Welaka had become a resort town that attracted visitors seeking medicinal cures from the many springs that provided mineral water. By 1906,Welaka was a Mecca for those seeking the “healing waters”.

Today, the small town of Welaka is a popular destination for freshwater fisherman and folks seeking a scenic riverfront retreat.

Visitors to this quaint town can explore the Welaka State Forest’s many hiking trails, enjoy bird watching in the many parks, visit the National Fish Hatchery and Aquarium, or hire a boat to explore the majestic St. Johns River.

Putnam County takes great pride in its efforts to preserve Florida’s natural and historic areas, and welcomes visitors to learn about our local heritage. In this planner, we have made a concerted effort to provide you with businesses and activities that will provide your group a quality experience that is interesting and unique only to this area.

Part of what makes Putnam County so unique is the quality of the natural and historic sites. We do ask that when you visit our natural areas that you only take pictures and leave only footprints, avoid contact with animals, and take advantage of using our knowledgeable guides. It is recommended that visitors share in our conservation efforts. Most of our attractions are public and free of charge. However, we do recommend that donations be planned for the continued operations and preservation of these attractions.

Developed in 1881, Interlachen was planned to accommodate the rail line that passed through the area between Palatka and Gainesville. The town’s name translates from Scottish as “between the lakes”.

The town grew as northern immigrants located here for the mild climate and the hopes of prospering in the citrus industry. In 1894, Interlachen shipped the second largest number of oranges in the entire state. Many of the building and homes in this community still stand as a heritage to the local history.

Established in 1877, Melrose is probably the only town in the United States that was deliberately built within the boundaries of four different counties.

The India Transit Company dug a canal connecting Lake Alto in Melrose with Lake Santa Fe, allowing commerce trade to reach Melrose. The export of citrus and vegetables through the mid-1890s drove the city’s economy. The trade commerce spurred the area’s growth as a destination for wealthy northerners. Melrose is now listed on the National Register.